You Don't Have a Right to Respect - Here's Why 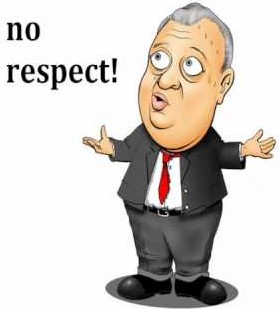 You Don't Have a Right to Respect - Here's Why published by The 1st Amender
Writer Rating: 3.0000
Posted on 2019-02-13
Writer Description: Changing the way people think about news.
This writer has written 203 articles.

Sorry snowflakes, Millennials, and all those around who would demand a level of respect just for existing. The answer being: "You don't have a right to respect."  This is an article that has been spun off of a 1st Amendment debate where an interesting person with even more interesting views stated: "What about people's right to be free from bigotry?" which was a portion of a response to my stance on the rights of the 1st Amendment. Nobody is to say that bigotry isn't a bad thing, or that people should expect bigotry. Far from it. Though at the same time, I think it is safe to say to take this context in a little bit of a milder notion: "Does someone deserve respect?"

Or even better: "Does someone deserve to be hateful to someone?" While obviously seen down on in society. Nobody would want to be looked down on. Or talked down to. People don't like it. There exists social consequence for being hateful to people. If you possess a discriminatory belief in your mind, in the end you would reap the consequence for being hateful to that particular group. Yet, at the same time, you have a right to be hateful.

Why is that? Why wouldn't we simply root out the problem, specifically people who have hateful mindsets? What's the problem with that? Wouldn't the world become a flowery and great place if we could root out and ostracize people who are hateful? Well, whether there is a government or not, there are already laws on the books that prevent hate-crimes. There are also a lot of societal problems that are involved when you decide to be apart of that action. We live in a day in age where it is not acceptable to behave this way. Yet, you are still free to do it.

The reason why you're still free to do it is: "Who is the ultimate decision maker to say what is right or what is wrong?" Take for example that you aren't bigoted towards people, but let's say you cross a street when you see a purple-eyed person on your side of the street because it makes you uncomfortable. Let's say that purple-eyed people are, in your brain, considered to commit assault by licking you on the side of the face. Because of this, you cross that street because you don't want your personal space invaded. Is there something wrong with doing that? Why or why not?

This brings the idea that respect, by the individual, is earned. Nobody has to sit there and respect you for existing. You could be a terrible person. You could find me to be a terrible person. This means you do not have to respect me. And at the same time, I don't have to respect you. There is no arbitrary edict condemning people for speaking their mind within reason. Nor is there the force of making people respect you, or others for that matter.

To put this into perspective. Of course there is some level of respect that I would give to a person. But at the same time, I wouldn't go out of my way to be harmful to someone I didn't know. After knowing someone would I consider to give someone respect. Nobody can command me who to respect and who not to respect. For now, because you read this, and I don't know you, you are currently "neutral" in my book. But leave a comment below, and I will see if you deserve respect in my personal judgement to my own person. Just as you possess that right as well.