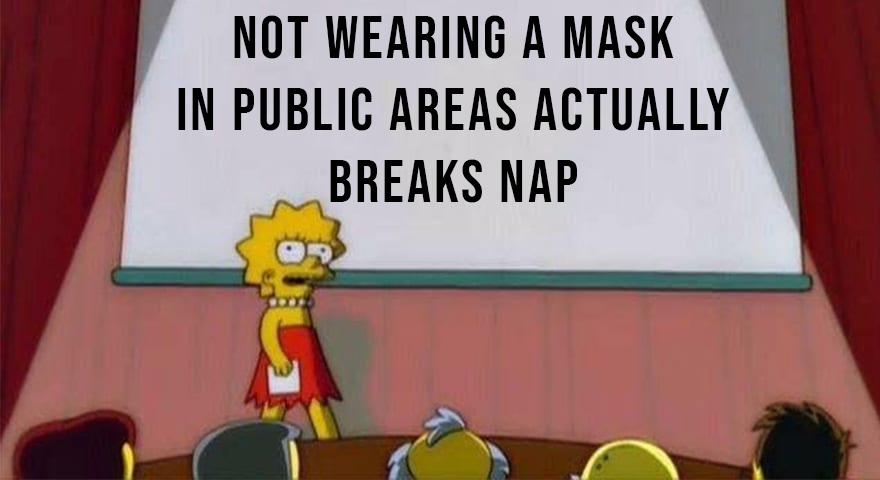 Not Wearing a Facemask in Heavily Populated Areas Breaks the Non-Aggression Principle published by The 1st Amender
Writer Rating: 3.0000
Posted on 2020-11-19
Writer Description: Loves to blog and debate
This writer has written 205 articles.

This is a common axiom that is touted among Libertarian-right communities and is often one of the key-defining characteristics for Libertarians all around the globe.  Though this got me thinking: "What can be labelled as aggression?"  I distinctly remember Rothbard writing passages on this regarding pollution.  The example goes as follows:

"First, the rivers. The rivers, and the oceans too, are generally owned by the government; private property, certainly complete private property, has not been permitted in the water. In essence, then, government owns the rivers. But government ownership is not true ownership, because the government officials, while able to control the resource cannot themselves reap their capital value on the market. Government officials cannot sell the rivers or sell stock in them. Hence, they have no economic incentive to preserve the purity and value of the rivers. Rivers are, then, in the economic sense, "unowned"; therefore government officials have permitted their corruption and pollution. Anyone has been able to dump polluting garbage and wastes in the waters. But consider what would happen if private firms were able to own the rivers and the lakes. If a private firm owned Lake Erie, for example, then anyone dumping garbage in the lake would be promptly sued in the courts for their aggression against private property and would be forced by the courts to pay damages and to cease and desist from any further aggression. Thus, only private property rights will insure an end to pollution — invasion of resources. Only because the rivers are unowned is there no owner to rise up and defend his precious resource from attack. If, in contrast, anyone should dump garbage or pollutants into a lake which is privately owned (as are many smaller lakes), he would not be permitted to do so for very long — the owner would come roaring to its defense."

If the pollution itself can be labelled as an aggression of the property (and therefore the body -- summarizing from John Locke and Rothbard's examples), I can think about masks in a somewhat similar manner, though viruses not perfectly analogous to pollution, it certainly has similar properties in that it is airborne. It is also analogous in that the people who are aggressing on others are not always aware that they are aggressing, and that it requires people to make them aware that they are.  So if we defend people's body by not aggressing on others unless acted on aggression, perhaps it can be considered aggression to someone who doesn't take the foresight to make reasonable steps to ensure they do not infect other people (such as wearing a mask in a populated area).

Imagine an elderly person who sits at home deathly afraid of COVID and does not want to risk his own life by going out and buying something as simple as groceries. To avoid such risks, they make measured steps to avoid being infected. To do this, the elderly individual calls up their grandchild to come over and do grocery shopping on their behalf. The grandchild comes over to the house, making many reasonable steps to avoid infection such as wearing a face mask and using hand sanitizer grabs the grocery list and go grocery shopping.  While this is happening, there is an individual in the grocery store, not wearing a mask or taking any precautions, currently looking at a can of beans. In the act of looking at the can of beans, this person, who happens to have COVID is talking on the phone. In the act of talking, spits tiny bits of spittle onto the can of beans effectively infecting that can of beans.

Fast forward about 30 minutes, the grandchild goes and is holding this very infected can of beans in their hand.  They purchase the can of beans who then rushes back to their grandparents, disenfecting themselves (but not the can of beans).  The elder grips the can of beans and begins to make something with them, who then becomes sick of COVID, and dies a premature death 3 weeks later completely unaware of where they got the infection.

In this example, no act of aggression was inherently made, as the connection of the can of beans to the perpetrator could not be met. Yet a person dies a premature death due to the neglect of another individual. Based on the pollution example, the act of not wearing a mask in heavily populated areas is simply an indirect casualty.  Would we ride around in a car that has swords across the sides jutting out in both directions? Probably not. The act of driving around the car with such aggressive accessories endangers the lives of others, and is a reasonable step to not break Non-aggression principle.

People, Libertarians especially, often tout the use of the non-aggression principle.  Yet cannot seem to make the additional step required in that, to be a condusive member to society, one that does not destroy the liberties of others, and does not break the non-aggression principle, that they make reasonable steps to avoid aggressing on another.  This means the use of wearing masks, if you are in a populated area (where it is unfeasible to be within 6-feet of one another), is aggression against others around you as well as others who might be where you just were.