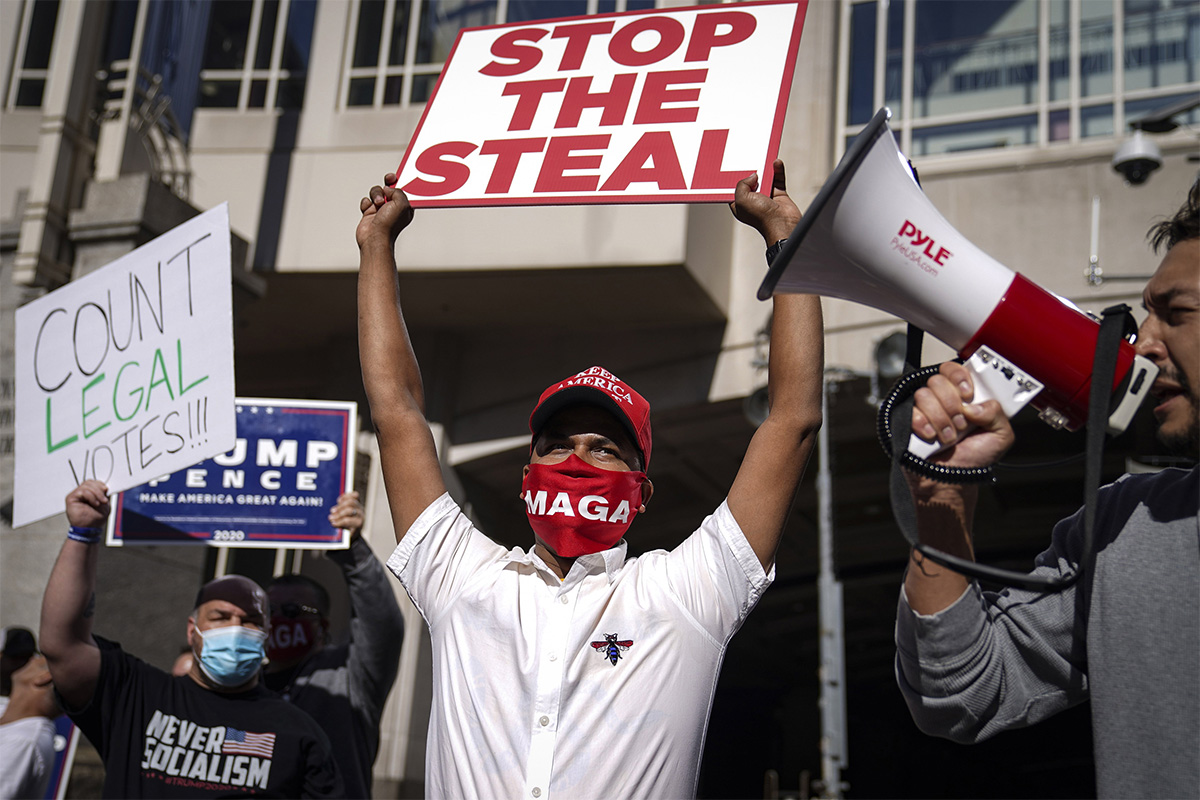 Usually when I go around looking for facts I can honestly start by looking at articles.  It doesn't really matter what article it is or where it comes from; I ultimately assume the article having a bias.  As people in general have biases, so do the articles people make.  The closest I could get to an unbiased interpretation would be the original source of the article's claim. Thankfully, usually articles are gracious enough to provide a source, usually annotating it in the footer or at the beginning of their article.

I explain this because it is important to the premise of articles talking about the election being stolen.  So-called "factual evidence" and testimonies have been found questionable at best.  For example, we can have an article like this:

The argument being that there was a "study" and that this "study" shows instances of voter fraud being the actual amount of registered voters is less in some counties than what was actually counted.  The "study" their article sites is found here, which eventually leads them to their data results which is here. What I found ultimately interesting though is how they compare their numbers.  I find it strange that they use the ACS 5 YR CVAP (5 year registered voters in 2018) and not 2020. Yet, without even having a need to find fraudulence by discriminating their data, it is important to recognize who exactly funds these "studies".

This particular "study" is funded by the Scaife Foundations which refers to three separate foundations in Pittsburgh, Pennsylvania. The three subdivisions are:

The fourth foundation, the Carthage Foundation, was folded into the Sarah Scaife Foundation in 2014. So it is fair to say that the statements being made, the backbone of this specific article, comes straight from a right-wing advocacy group funded by money made in the industrialist era of the United States.  Is there something wrong with this? No, not at face-value anyway. I'm a believer that people have a right to do with their money as they please.  Yet, I do find it rather strange that the source for this article is not a 3rd party unbiased source, but instead one funded with strong political motives and has been seen conveniently speaking in favor of right-wing policies and badly of left-wing ones. Why does this article use the Judicial Watch as a source instead of an unbiased third party?

We can try another article.

This article spends the first 7 paragraphs copy-pasting from their source on the allegation investigations finding a 99.99% accuracy in Cobb County Georgia after an audit was performed. The study has been published here.  What was said in the summary is as follows:

The audit team, consisting of law enforcement officers with the Secretary of State’s office and GBI, reviewed 15,118 ABM ballot oath envelopes from randomly selected boxes that stored the 150,431 ABM ballots received in Cobb County for the November 3, 2020 General Election. The sample size of oath envelopes reviewed was chosen in order to reach a 99% confidence level in the results. Utilizing the decision guidelines set forth below, the audit team confirmed the accuracy of the initial determination of the Cobb County Elections Department in all but two 2 cases. In the two cases where the audit team determined that the voter should have received a cure notification, the audit team was able to confirm by interviews with the voters that the actual voters in question cast the ballots. Based on the results of the audit, the Cobb County Elections Department had a 99.99% accuracy rate in performing correct signature verification procedures. The audit team was also able to confirm that the two ballots that should have initially been identified by Cobb County Elections Department staff as requiring a cure notification were actually cast by the voters to whom they were issued. No fraudulent absentee ballots were identified during the audit.

I mark that last one, because when we go back to the original article we find this:

Trump, who is currently trailing Democratic presidential candidate Joe Biden by about 12,000 votes in the state, complained that Georgia’s recounts were unlikely to catch fraud unless they included a review of signatures on absentee ballots.​

I find it infinitely frustrating that no matter what article I pick, (I can pick any one of these at random) when I go to the sources, I find the source to be non-credible, and the substantiations always seem to wind back up to Donald Trump. Usually when you find a claim, you can find 3rd party results that do not involve themselves with U.S. politics or are relatively unbiased looking at it from a lens overseas, or at least from a separate perspective.  Yet every time I look at an allegation on voter fraud, I find it just simply comes back to the very same source regardless of where I find it.

If I look further into the other side, I can try to apply the same logic coming from meta-analysis studies regarding voter fraud in the United States:

This is the Brennan Center for Justice which has been funded by The Carnegie Corporation of New York.  For anyone who doesn't know, Dale Carnegie was a Republican in his day. So my attempts to linking this study to democrat pundits is quantifiably falsified.  Therefore, when I look at the Brennan Center, I find it to be a relatively unbiased source, seeing as they propose the opposite of what the Republican party is saying about voter fraud. One of the many studies listed by the Brennan Center is found here:

This study did find instances of substantiated voter fraud in the past:

Given that we have good studies, made by people who actually are in the business of studying political scientists, not funded by right-wing think tanks but simply a 3rd party looking at the issue in an objective way, we find that there is evidence out there, and that all we have to do is do a little bit of extra research to find it.

Unfortunately, you can lead a person to enough logic and reason to fill a book of Aristotle, yet they will not ever listen. Not only will they not listen, they will hate you for it and ultimately close a door of opportunity which used to be open for you.  So as I write this, and you read it, keep that door open, and think about what is being said here, and start looking at things from an objective data-driven lense instead of a biased one.