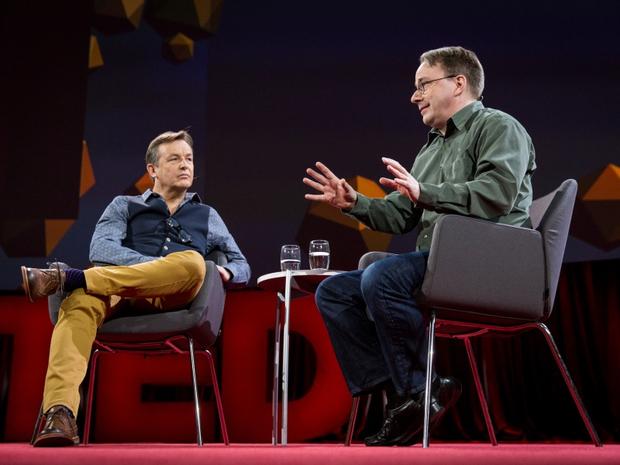 Twenty-five years after its inception, Linux remains the poster child for open source. And yet, ironically, Linux was never really intended to be open source, according to a recent TED interview with its creator, Linus Torvalds.

For those who have been paying attention, this isn't news. Torvalds has never been particularly religious about free and open source software in the way that, say, Richard Stallman is. This despite Torvalds settling on that most orthodox of all open source licenses, the GNU General Public License.

SEE: Get Up To Speed: Linux (Tech Pro Research)

But, as it turns out, that certainly wasn't about politics, and it wasn't even about open source. It was just a way to invite commentary on his code, an emphasis that remains core to Torvalds' philosophy 25 years later.

In the recent TED interview, Torvalds disavowed any intention of open sourcing Linux as some grand moral or political statement. In responding to a question from moderator Chris Anderson, Torvalds made it clear that he wasn't even seeking co-developers:

"I did not start Linux as a collaborative project, I started it for myself," Torvalds said. "I needed the end result but I also enjoyed programming. I made it publicly available but I had no intention to use the open-source methodology, I just wanted to have comments on the work."

Not code, per se. Just comments.

In fact, in later years Torvalds has eschewed more stringent licenses (like GPLv3) because they seek to force would-be users to embrace a moral philosophy as to how code can be used. Torvalds, who doesn't think of himself as much of a people person ("I don't really love other people, but I do love other people who get involved in my project"), believes open source is "just a superior way of working together and generating code."

Even people (or companies) that don't particularly like each other, or that compete with each other, he told Anderson:

"What I love about open source is that it really allows different people to work together," Torvalds said. "We don't have to like each other. And sometimes, we really don't like each other."

Between the launching of Linux and today, we've waded through decades of free and open source holy wars, but Torvalds' first instinct was right: Software doesn't want to be free, necessarily. It just wants to be open enough that developers can get to work with a minimum of fuss.

That's why Amazon Web Services will dominate the next decade of enterprise computing: It sells proprietary software services, but they're accessible at a reasonable price and just a credit card swipe away. That's open enough to generate an $8 billion business.

It's why Atlassian has built a multi-billion dollar business selling proprietary software to open source-loving developers: Its collaboration tools are comparatively cheap and just a download away.

Speaking about open data two years ago, Tim O'Reilly offered a principle that explains why this works:

There's a pragmatic open and there's an ideological open. And the pragmatic open is that it's available. It's available in a timely way, in a nonpreferential way, so that some people don't get better access than others. And if you look at so many of our apps now on the web, because they are ad-supported and free, we get a lot of the benefits of open. When the cost is low enough, it does in fact create many of the same conditions as a commons.

Back to Torvalds. When he open sourced Linux, it wasn't really about open source. It was about inviting comments on his work. Along the way, he has realized far more value: "I don't want to limit what people can do with my code. I just want their improvements back. But if they do something stupid with it, that's their choice."

In short, the greatest legacy Linus Torvalds has left us isn't his code: Its his practical approach to sharing code.