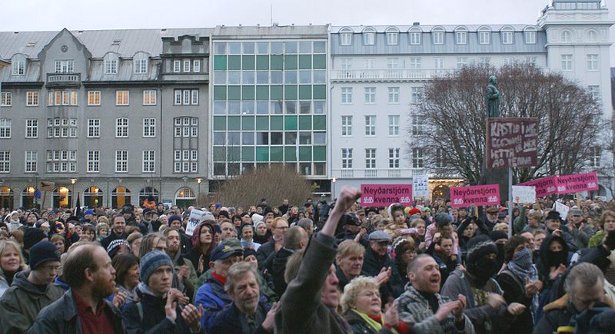 Icelanders Overthrow Government and Rewrite Constitution After Banking Fraud-No Word From US Media published by The 1st Amender
Writer Rating: 3.0000
Posted on 2016-04-16
Writer Description: Loves to blog and debate
This writer has written 205 articles.

Can you imagine participating in a protest outside the White House and forcing the entire U.S. government to resign? Can you imagine a group of randomly chosen private citizens rewriting the U.S. constitution to include measures banning corporate fraud? It seems incomprehensible in the U.S., but Icelanders did just that.  Icelanders forced their entire government to resign after a banking fraud scandal, overthrowing the ruling party and creating a citizen’s group tasked with writing a new constitution that offered a solution to prevent corporate greed from destroying the country. The constitution of Iceland was scrapped and is being rewritten by private citizens; using a crowd-sourcing technique via social media channels such as Facebook and Twitter. These events have been going on since 2008, yet there’s been no word from the U.S. mainstream media about any of them. In fact, all of the events that unfolded were recorded by international journalists, overseas news bureaus, citizen journalists and bloggers. This has created current accusations of an intentional cover up of the story by mainstream U.S. news sources.

An “iReport” on CNN, written by a private citizen in May 2012, has questioned the reasons why this revolution has not been widely covered in the U.S., suggesting that perhaps the mainstream media is controlled by large corporate interests and thus has been unwilling to report on Iceland’s activities. That report is currently making its way around social media. CNN today placed a statement on its website saying: “We’ve noticed this iReport is being shared widely on Facebook and Twitter. Please note that this article was posted in May 2012. CNN has not yet verified the claims and we’re working to track down the original writer.” It is interesting to note that CNN’s European version, CNN Europe, already covered the story of the protests and the government’s resignation, leading many to question why CNN would now need to “look into” the claims.

Besides CNN Europe’s own coverage of the scandal, the events in Iceland were widely covered by international media and are easily verified by a simple search on Google which leads to a variety of reputable international news sources that ran numerous stories on the Icelandic revolution. A whole documentary has been made on the governmental overthrow called Pots, Pans and Other Solutions, and now, the conversation is focused on whether or not the citizens’ actions actually worked to make Iceland a more equitable nation.

To understand the enormity of what happened in Iceland, it’s best to draw parallels between the initial banking fraud that caused Iceland’s economy to collapse and the banking fraud in the U.S. that caused the mortgage crisis six years ago. In Iceland, unscrupulous bankers had inflated the value of Iceland’s banks internationally which in turn caused the “bubble” to eventually burst in 2008 and saw most of Iceland’s banks going bankrupt.

A similar situation happened in the U.S. just one year before the collapse in Iceland, with the mortgage crisis of 2007. Mortgage lenders in the U.S. knowingly lent money to prospective homeowners who could not afford to purchase a home. This, in turn, led to falsely inflated home values and a vicious cycle of too much lending. Just as in Iceland, the bubble burst and many U.S. banks were about to declare bankruptcy. In Iceland, the citizens took to the streets by the thousands, banging pots and pans in what is known as the “pots and pans revolution,” leading to the arrest and prosecution of many unscrupulous bankers responsible for the economic collapse. Icelandic citizens also refused to pay for the sins of the bankers and rejected any measures of taxation to bail them out. In the U.S., the government bailed out the banks and arrested no one.

The pots and pans revolution in Iceland was not covered by mainstream U.S. media. In fact, any information about this revolution is found only on international newspapers, blogs and online documentaries, not on mainstream front-page articles as would be expected from news organizations covering a story of this magnitude. The New York Times published a small handful of piecemeal stories, blogs and opinion pieces, but mostly glossed over the main narrative by saying the 2008 financial collapse in Iceland caused “mayhem far beyond the country’s borders” rather than pointing out that Icelanders took to the streets with pots and pans and forced their entire government to resign. As the saying goes, “there are two sides to every story,” but a more accurate articulation of this phrase would be “in any story, there are multiple sides, viewpoints, opinions and perspectives.” The story in Iceland is no exception. Socialist and Marxist blogs here in the U.S. say that there’s been a massive U.S. news conspiracy and cover up about the revolution in Iceland because the U.S. media is controlled by corporations, including banks, and the “powers that be” don’t want U.S. citizens getting any ideas to stage a revolution of their own. Some conservative Icelandic bloggers claim that while there was, indeed, a revolution, it did not lead to a successful or widely accepted new constitution. They say the situation in Iceland is worse than ever, and that international news reports of an effective democratic uprising leading to a better government are simply myths. Social media commenters are scratching their heads over why they were robbed of the story of Iceland’s pots and pans revolution.

As with most narratives, the truth may lie somewhere in the middle of all of these varying perspectives. One thing is clear, though: it’s nearly impossible to find one mainstream U.S. news report of the pots and pans revolution in Iceland, the resignation of Iceland’s entire government, and the jailing of the bankers responsible for the economic collapse there. Whether or not the revolution led to a more fair government or a workable and effective constitution is irrelevant to the fact that the U.S. media has essentially skipped over this story for the past five years.

Is it possible that mainstream media sources purposely covered up the Iceland story to appease their corporate sponsors? It doesn’t seem likely, and yet, what explanation could be given as to why this news never made it to the front pages of our most trusted media organizations here in the U.S.?

As Iceland struggles to regain its footing with a new government, U.S. citizens may or may not be able to look to Iceland as an example of perfect democracy in action. The real question, though, is why weren’t U.S. citizens given the information about the ousting of the Icelandic government and the jailing of the unscrupulous bankers? Are journalists in control of the mainstream media or is there some truth to accusations that big business may, in fact, be strong-arming reporters to keep quiet about world events that could inspire similar actions here in the U.S.?