Fact Check: An AR-15 Wasn’t Used In Orlando, And It Wouldn’t Have Mattered Anyway 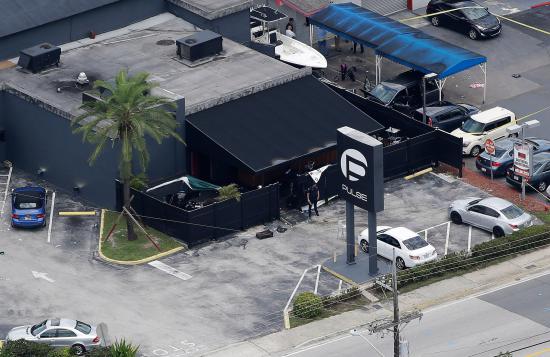 Fact Check: An AR-15 Wasn’t Used In Orlando, And It Wouldn’t Have Mattered Anyway published by The 1st Amender
Writer Rating: 3.0000
Posted on 2016-06-14
Writer Description: Loves to blog and debate
This writer has written 205 articles.

The Pulse nightclub massacre in Orlando, Florida is the deadliest Islamic terror attack in the United States since the terror attacks of 9/11.

49 people were murdered in the slaughter, and 53 more were wounded. Despite claims from the Orlando police that the terrorist did his damage in the opening moments of the attack, we know for a fact that he was still killing people at least a half-hour into the event.

The terrorist began shooting outside Pulse at approximately 2:02 AM. It was at least 37 minutes into the attack when Eddie Justice was gunned down in a Pulse bathroom, along with others patrons. He sent his last text at 2:39 before the terrorist entered the bathroom he was hiding in, and opened fire.

These are facts we know

The terrorist was then able to enter the club.

Once inside, the terrorist then fired into the packed crowd, repeatedly and at very close range, with no apparent resistance from any of the club-goers reported. This isn’t blaming the victim by any means, just noting that no accounts of the attack show that the club goers attempted to rush or disarm the gunman, even when he shot people at a distance of 2-3 feet—inside an arm’s length—in the club bathroom, over the top of the stall.

With an ineffectual police response outside the club and no known resistance inside the club, it was sadly irrelevant which firearm the terrorist chose for his attack.

It’s important to be very clear on this: when a terrorist faces no significant opposition, any common firearm can be used to inflict tremendous casualties.

We saw this at Virginia Tech, where the murderer was armed with one of the most common and utilitarian handguns in the world (a Glock 19 9mm pistol) and standard-capacity magazines, as well as a puny Walther P22… a training pistol.

We also saw it at the Washington Navy Yard, where the murderer used a very common pump-action shotgun to take numerous lives at will until law enforcement were finally able to locate, close with, and engage him. While an AR-15 was used at Sandy Hook Elementary School, the outcome would have been the same if he had decided instead to use either of the pistols in his possession, or the Saiga 12-shotgun he’d decided to leave in the trunk of the car.

In each instance, these violent criminals faced no credible resistance for long periods of time, and were able to cut down people who either could not or chose not to fight back.

Counter-terrorism and law enforcement experts all agree that the only thing that is going to stop an attack is effective resistance, preferably in the form of effective rounds on target. The media and Democrat Party mocked Wayne LaPierre of the National Rifle Association when he said it after Sandy Hook, but he was entirely, factually accurate: the only thing proven to effectively stop a bad guy with a gun is a good guy with a gun, which Orlando SWAT finally did three long hours after the attack began.

It’s frankly fascinating to watch anti-gun politicians and the media attempt to sow so much fear about AR-15s and similar firearms.

You know how scary they are?

They’re so terrifying that little girls love to shoot them.

So do boys and young men, semi-out-of-shape, middle-aged gun writers, senior citizens, people with disabilities or injuries who can’t easily control the recoil of a handgun or shotgun, military veterans who prefer the familiar controls like the military’s M4 and M16 rifles, and millions of other people who simply enjoy shooting. Currently, there are estimated to be 9 million AR-15s alone in the United States.

Why are they so popular?

AR-15s are the most popular rifle sold in the United States for the following reasons:

Put simply, AR-15s are inexpensive, easy to customize, and being much less powerful and using much smaller bullets than most other rifles, they’re a lot more fun to shoot for more people.

In addition to 9 million AR-15s, there are millions of other firearms that fall under the broad classification of “modern sporting rifles,” or MSRs. Their common features tend to be that they shoot low-to-medium power centerfire rifle ammunition, fire one shot per trigger pull, and feed from a box magazine. This is only a very broad classification, however: there are many MSRs which are in rimfire calibers, and some long-range target rifles that fit the overall design or an MSR, but are in magnum calibers and are perhaps the only rifles in the classification that misleading media and politicians can honestly call “high-powered.”

The round on the left (above) is the .50 BMG, one of the most powerful rifle rounds currently made. It is legitimately “high powered.” The round beside it is the .30-06, a very popular hunting cartridge that was also the standard U.S. military service rifle cartridge in World War I, World War II, and Korea. In the middle is the .308 Winchester, which is very similar in power and performance to the .30-06, but which is just slightly less powerful. Fourth from the left (second from the right) is the .223 Remington, the most common cartridge for the AR-15, and one of the least powerful centerfire rifle rounds made. It’s visually identical to the 5.56 NATO chambering, with shoots a little faster. On the far right is the .22 Long Rifle (.22LR), often used for beginner training and the second most common chambering of AR-15s after the .223 Remington/5.56 NATO family of cartridges.

“Military-Style” Firearms And “Weapons of War” Are Largely A Myth

Despite attempts by politicians and the media to claim that the common, kid-friendly AR-15 is a “weapon of war,” or “military-style,” actual military rifles have been banned from manufacture for civilian purchase for exactly 30 years.

The Hughes Amendment to the Firearm Owners Protection Act, signed into law by President Reagan in 1986, made it illegal to manufacture selective-fire (firearms that can be used as machine guns) rifles and handguns to the public.  Only military, police, and specialized gun dealers and manufacturers selling to these markets can acquire them.

The most common rifles, pistols, and shotguns sold in the United States are not machine guns, not “weapons of war” as Hillary Clinton so glibly lies, and “military-style” is all about looks, not performance. Put bluntly, it’s a con job.

The most common rifles, handguns, and shotguns are semi-automatic, or “self-loading” firearms. They fire one shot per trigger pull, and (because I feel I have to repeat things for certain politicians) absolutely cannotbe fired as machine guns.

Here’s the difference between machine guns and semi-automatic firearms in a short, and very easy to understand video.

The basic concept for self-loading or semi-automatic firearms is old. It has been around since the 1880s.

While there are various semi-automatic designs, they all use some of the energy of the cartridge being fired to eject the empty cartridge and load another round into the chamber of the gun. The shooter can then opt to fire another shot (if he or she so desires) by pulling the trigger again.

One trigger pull, one shot.

Each shot requires the shooter to pull the trigger again.

So it has been since the days of the horse and wagon.

But let’s get back to the modern day demonization of the AR-15, and attempts to demonize other guns that even vaguely look like them.

As noted earlier, AR-15s are incredibly common because of a wide range of very good reasons. Ergonomic and easy to use by anyone, they’re the iPhone of the firearms world.

The Sig MCX used in the Orlando attack is just a modern take on basic concepts more than a century old.

I’ve only handled one at SHOT Show, but they look like fun.

It’s not particularly scary, is it?

It’s just another take on a basic concept that has been around for longer than any of us alive.

In a broader view, the media and Democrat politicians keep pushing the false claim that we have a “gun violence epidemic” in the country. That’s a bizarre claim to make, when we’re experience record-breaking gun sales at the same time we’re seeing the lowest per capita firearms homicides in U.S. history, per the FBI.

Robert Heinlein turns out to have been correct: an armed society is a polite society.

In terms of the horrific Islamic terror attack in Orlando, it was the lack of effective resistance and incredibly long period that the terrorist was allowed to operate that resulted in so many deaths, not his choice of guns.

Blaming the gun or even a broad family of firearms when many different firearms could have been used is incredibly dishonest.

Then again, that’s what we’ve come to expect from this nation’s news media and politicians, isn’t it?