My Most Ideal Ideology - Minarchism 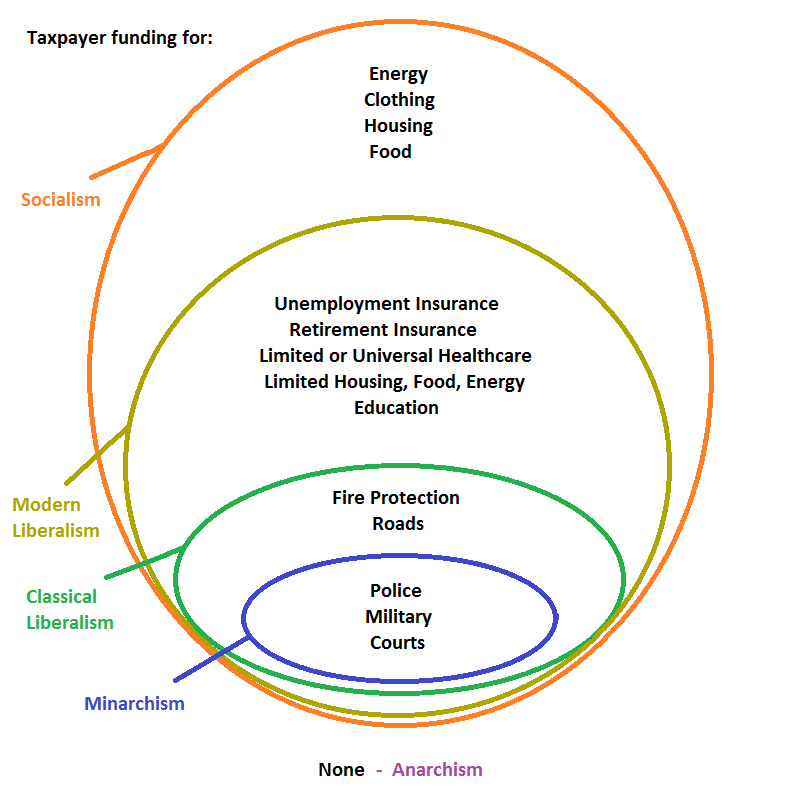 My Most Ideal Ideology - Minarchism published by The 1st Amender
Writer Rating: 3.0000
Posted on 2019-01-01
Writer Description: Loves to blog and debate
This writer has written 205 articles.

I am a minarchist. True and true. The minarchist definition is as follows: A libertarian political philosophy where a model of a state whose only functions are to provide its citizens with the military, the police and courts, thus protecting them from aggression, theft, breach of contract and fraud enforcing property laws.

This type of philosophy is often hyper-critical of the liberal statist types. Specifically those who believe in an overall government assistance to make lives better for others. While I am not against making things better for others, I am against forcing those to pay for the welfare of others by force. (Taxes to fund a welfare state)  I guess I can go into the aspects of what brings me to become a Minarchist instead of an Anarcho-Capitalist or a standard Republican. Mind you I have extensively studied both and have derived myself to the conclusion. While this article cannot possibly convince anyone to consider being a Minarchist, I invite those to question and proceed forward on what exactly would make you an anarcho-capitalist or a Republican.

And unfortunately to leftists, I cannot help you with a single article. We just do not see eye to eye. Now onto the explanations:

Why aren't you a Republican?

They are pro-authoritarian. Just like the Democrats. You just read that, and if you are Republican, may be seething at the maw to let me get a stern talking to fight against me, and defend the precious Republican party. They are, just as I said it initially, authoritarian. How so?

There is a lot more. Please, Republicans. I have nothing against you. This is just what I have found out, and that I do not align with such authoritarian principles. Now onto the more interesting less-known political party. Anarcho-Capitalist.

Why aren't you an Anarcho-Capitalist?

Anarcho-Capitalist. Are you reading this right now? If so, good on you! I love your political philosophy. I really do. I love the purity of it too. Everything about Anarcho-Capitalism speaks to me. The issue? It's too theoretical. There. I said it. Your theory cannot actually work in the real world, as much as I want it to; it will not represent reality. I've been able to address the issue with "Who's going to build the roads?" in an article. I even addressed that monopolies cannot realistically exist. Though I have yet to write an article about that. The main issue I have and I present this to all Anarcho-Capitalists I meet:

"Let's say if we have full anarchy and it now resides on the people to defend their territory. What is to stop an insane person with getting hold of enough fire power to take over an entire county? Under a presumption, lets say that a person gets ahold of a tank. That person makes a coalition of other mercenaries and take over a county, and effectively take over an area clearly through their force of fire power, and effectively rule with force. Nobody can effectively defend against the guy who built a tank. (And this is not theoretical. There really was a guy who built a tank on his own!)They collect taxes by threat of blowing your property up, and that group becomes rich. What stops that from happening in your ideal world of Anarchist Capitalism?"

Forget about Capitalism. I know that works great. I wrote about that as well. Though the question is whether or not someone can take over an area with fire power alone. Regardless of political ideology, you have to recognize that authoritarians do and want to exist. They want to take over land/property so they have power. This has existed throughout history and they're not going away any time soon. There are even people who obtain this power and are sociopathic. This would increase the level of a "Mad Max" -esque scenario. I don't have an answer for this, and while I admire your purity to your political doctrine; it simply is unrealistic to be used as a modern political philosophy.

So this is where I land. Right in the middle of these two. I believe in some level of government. But only the most basic form of government where welfare is not a thing, minimum wage is not a thing, but they do have a military and a way to stop the local militia from forming. This is a beautiful thing, and it is exactly why I am a Minarchist. Granted, you may not take my articles seriously, and if you did read it to this far: I admire your perseverance.